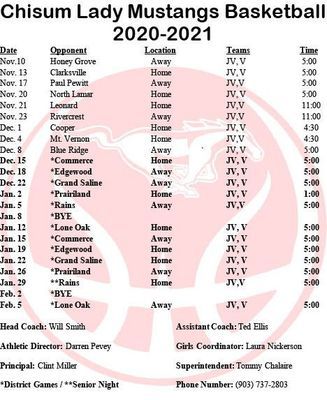 The 2020-2021 edition of the Chisum High School Lady Mustangs basketball team will take to the court on November 10 at Honey Grove. Junior Varsity action begins at 5:00 pm, with the Varsity game to follow.

Mustangs' Coach Will Smith is looking forward to a season that will likely help set the pace for even better seasons to come.

"We will have four returning players to Varsity this year," Smith said, "two of which are returning starters — Sr. Chloe Prestridge and Soph. Peyton Holland."

Smith noted that the Lady Mustangs will emphasize the same techniques he has always instilled in his players as a coach.

"We will be young but a lot faster and more athletic this year. We will stay true to ourselves and focus on defense and getting stops." Smith said. He added that the Lady Mustans have a good core of players that are great leaders.

"We will lean on senior Chloe Prestridge, who stepped up

big last year during district as a scorer and defensive stopper," Smith said. "Peyton Holland brings some major speed to the court at point guard. The experience she gained as a freshman last year will pay dividends this year. We have some good players coming up from the JV this year that will add depth to some needed spots on the court."

The Lady Mustangs first home game will be held Nov. 13 against Clarksville

Would You Pray for Portland?