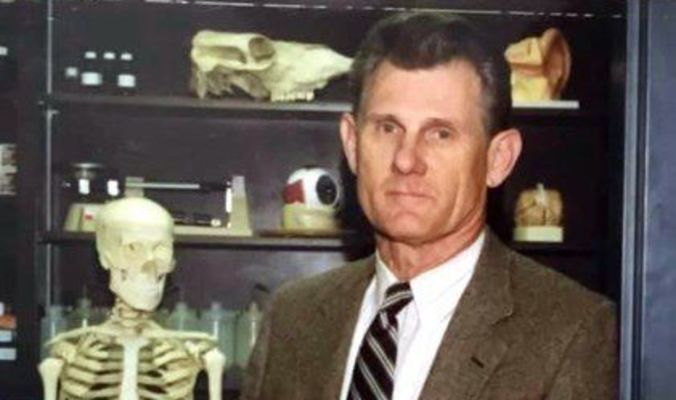 Emory Charles “E. C.” Hancock, 86, of Paris, passed away Tuesday, Aug. 18, 2020, at Heritage House of Paris. Services are scheduled for 2:00 p.m. Saturday, Aug. 22nd, at Bright-Holland Funeral Home with Bill Coleman officiating. Burial, with military honors, will follow in Restland Cemetery at Roxton. The family will receive friends at the funeral home one hour prior to the service. Mr. Hancock, the son of Emory Elmo Hancock & Ella May Sullivan Hancock, was born Nov. 16, 1933, in Wellington, Texas. Mr. Hancock, a graduate of Roxton High School, received his bachelor degree in biology and chemistry from East Texas State University (now Texas A&M University-Commerce). He earned his Master of Science Degree in biology from Texas A&M Commerce and did post-graduate work at Sam Houston State University and Texas A&M University-Commerce. He was a graduate assistant professor of biology while earning his master’s degree. Mr. Hancock completed the United States Marine Corps’ Officer Training School at Quantico, VA and spent two years teaching in the Atomic, Biological and Chemical Warfare School. Following his military service, he taught two years at Arlington Junior College (now UT-Arlington), two years at Grand Prairie High School, and two years at Bonham High School before starting his long career at Paris Junior College. Mr. Hancock, who started teaching biology at PJC in the fall of 1964, estimated that he had taught over 15,000 students during his 41-year tenure. When PJC opened its nursing program in 1968, biology, microbiology, anatomy and physiology, and nutrition classes were in demand. Mr. Hancock was there to teach and direct those programs. He was named Outstanding Educator of America in 1974-75. Paris Junior College faculty members introduced the PJC Master Teacher’s Award in 1981-82, and the first instructor to receive the annual recognition was Mr. Hancock. In 2012, he and Mrs. Hancock were inducted into the PJC Hall or Honor. He was a member of the First United Methodist Church of Paris, the Lion’s Club, was the sponsor for the Key Club at PJC. He was an avid hunter, enjoyed fishing, his hunting dogs, working on his tractor, and especially his grandchildren. In Little League Baseball, he coached the Orioles, Phillies, and Vets and won many championships. He was a Boy Scout Leader. Mr. Hancock helped many kids and is still known as “Coach” to them. He was preceded in death by his parents, and a son, Clayton Scott Hancock. Survivors include his wife, Jimmye Bishop Hancock, whom he married on Sept. 1, 1957, building sixty-two years of family and memories, one son, Clint Hancock of Dallas, two grandchildren, Justin Hancock & wife Daphne of Austin, and Jessica Hancock of Austin, Ross Brown of Evansville, IN who thought of E. C. as his “American Dad”, one brother, Bobby Hancock of Kennett, MO, a special cousin, David Gibson, M.D. & wife Susan of CA along with several nieces & nephews and a long list of former students and friends. In lieu of flowers, the family requests that memorials be made to The Paris Junior College Nursing Program, 2400 Clarksville St., Paris, TX 75460.

BGAR Pet of the Week