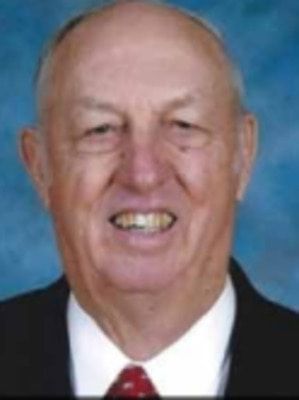 Harvey Lynn Milton, 89 of Bugtussle passed away Friday, February 4, 2022, at his daughter’s home (and his home for two years) in Bugtussle one mile from his birthplace. Funeral services were held on February 12 at the HL Milton Sports Complex in Ladonia, with son Robert Wayne Milton, grandson Justin Milton, David Ballard, Clint Norwood, Welton Stoker, and Marty Kueckelhan officiating. Burial followed in the Oak Ridge Cemetery. Services were under the direction of Cooper Sorrells Funeral Home, Honey Grove. Harvey Lynn was born on September 1, 1932, in the Oak Ridge Community. He was the son of Jackson Troy Milton and Annabelle (Wishard) Milton. He met Patsy Yarbrough on a blind date in March of 1956. They then married on September 8, 1956, at Aunt Jewell’s house. Patsy passed away on August 12, 2019. They were married for nearly 63 years. Harvey Lynn graduated from Ladonia High School in 1949. He received his Bachelor’s Degree from East Texas Teachers College in 1953. He proudly served in the US Army from 1954 - 1956. He always enjoyed telling his army stories. After his discharge from the army, he received his Master’s Degree from East Texas Teachers College. He often told of hitch-hiking to Commerce to college. He said he only remembered having to walk from the college to the Commerce Y one time. Someone would always pick him up and bring him to Bugtussle. His first teaching job was teaching Ag at Peacock, Texas. In his second year, he taught science at Boles Home. In 1958 he came home to teach science and be elementary principal at Ladonia Schools. While teaching school he worked at TEMCO at night. In 1960, he became high school principal at the newly formed Fannindel ISD. He remained in that position until 1979 when he became high school principal at Honey Grove. He spent five years as a high school principal and was named superintendent of Honey Grove Schools in 1984. While serving as superintendent of Honey Grove, he was honored with the town’s Citizen of the Year in 1985. In 1995 he was named Region X’s Superintendent of the Year. He retired in 2001 from Honey Grove Schools after serving as superintendent for 17 years. Harvey Lynn took great pride serving on the Texas State Beta Council for 36 years. He was chairman of the Texas State Beta Council and served on the National Beta Club Board of Directors from 1980- 2001. He was chairman of the National Beta Club Board in 1984- 1985 and 1999-2000. He is the only person to serve the National Beta Club Board of Directors as chairman for more than one term. The National Beta Club named him as a Board Member Emeritus. Mr. Milton came out of retirement in February 2006, to help the Fannindel Schools until they got a new superintendent. He said he would help them for six months and 10 years later retired for a second time. He was named to the Fannindel School Hall of Fame in 2010. In 2012, the Fannindel School Board honored him by naming the Fannindel gymnasium the H. L. Milton Sports Complex. The family considers it a privilege to have his funeral service in the gym named in his honor. A local superintendent once said he is not only the superintendent of Honey Grove; he is the granddaddy of all superintendents in the state of Texas. He has also been known as a walking calculator. He always had numbers on his mind and did up until the very end. He was President of the McCraw’s Chapel Water Supply Corporation, President of the Oak Ridge Cemetery Association, and President of the Verne Cooper Scholarship Foundation. Of all of his accomplishments, serving as an elder of the Oak Ridge Church of Christ since 1976 was his greatest honor. He served as a Bible class teacher and church treasurer for many years for the Oak Ridge Church of Christ. He attended church services all of his life. The last time he was able to attend services was October 17, 2021. One of his favorite hobbies included farming with a John Deere tractor. He believed that everyone needed to work. He was always willing to help anyone in need. He and his wife showed this by serving as foster parents to many needy children. They kept three girls for an extended period of time. In his 56 years of education, he touched the lives of many students and teachers. “God is not unjust; he will not forget your work and the love you have shown him as you have helped his people and continue to help them” Hebrews 6:10. He was preceded in death by his parents, his wife, his son-in-law Jerry Jones, his grandmother, and numerous aunts and uncles that raised him after being left an orphan at the age of 6. Survivors include his son Robert Milton of Bugtussle; his grandson Justin and wife Mallory Milton; great-grandchildren Maylee and husband Jackson Leonard and their daughter Mabry, Emery and Hadley Mae; and his granddaughter Jordan and husband Clay Humphries and their son Landz. His daughter Ruth Ann Jones of Bugtussle and her family Melanie Pierce and husband Derrick of Garland and their families; Jeremy Jones and wife, Stephanie, of Mena, Arkansas and their families, and many cousins who grew up with him like brothers and sisters. Harvey Lynn is also survived by a host of friends and family. The family would like to thank the many caregivers that helped care for him since November. “I have fought the good fight, I have finished the race, I have kept the faith” II Timothy 4:7-8. In lieu of flowers, donations can be made to the Oak Ridge Church of Christ, 11372 E FM 1550 Honey Grove Texas 75446; Oak Ridge Cemetery Association, 761 CR 3475 Honey Grove, Texas 75446 or the H.L. Milton Scholarship Fund set up at the Fannin Bank in Honey Grove or Bonham to benefit Honey Grove and/or Fannindel graduating Beta members.